Knowledge Hub “All I ever wanted was everything”

“All I ever wanted was everything”

13 May by Joe Miller 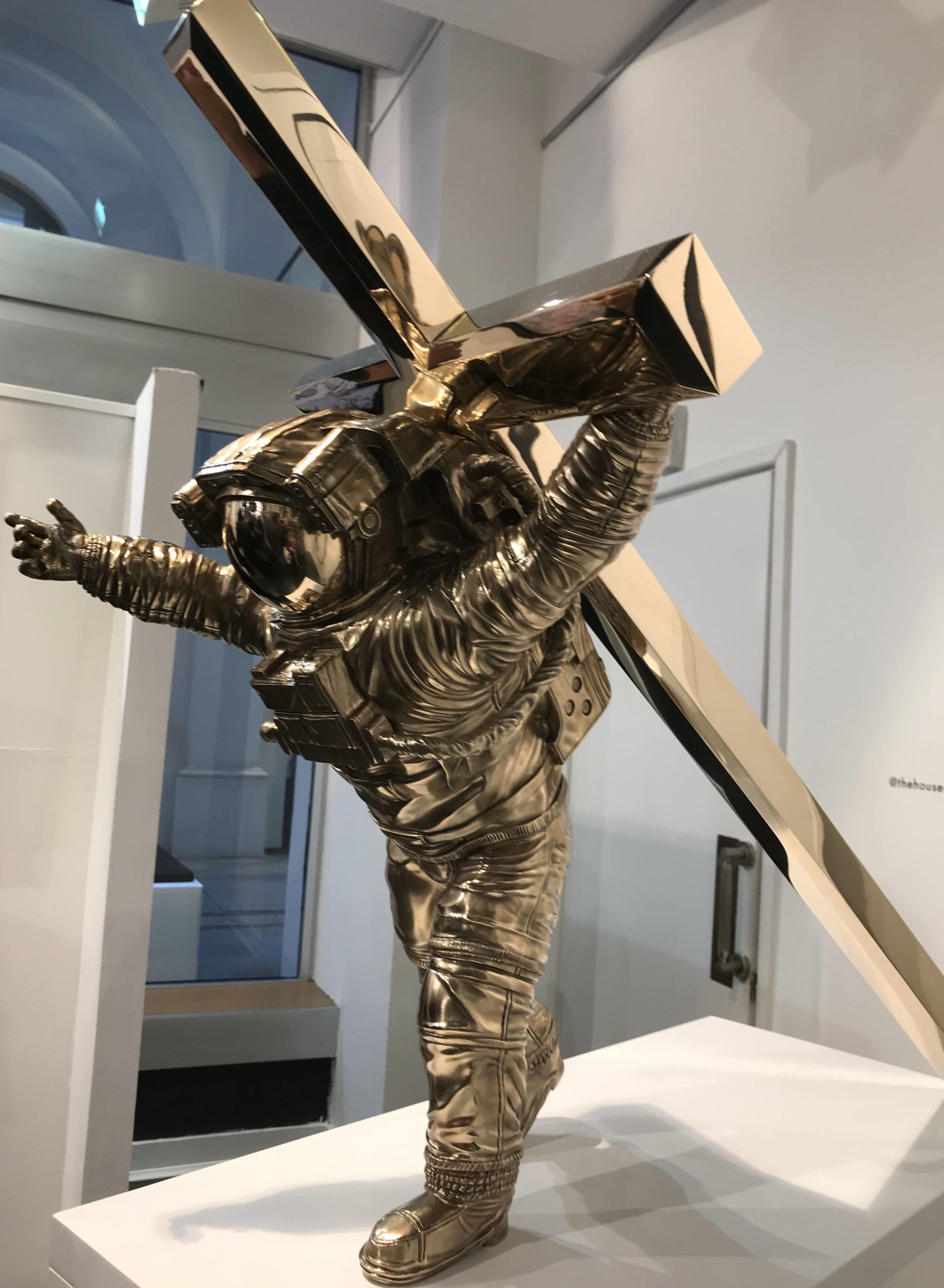 Joseph Klibansky @houseoffineart – “All I ever wanted was everything “

This article has been written by Sabrina, who is currently doing her Foundation Fashion & Personal Styling Diploma at LCS. You can follow her @yappiestyling

Thursday 9th May 2019 I was fortunate enough to be invited to the private viewing of the artist Joseph Klibansky. His exhibtiton was titled “All I Ever Wanted Was Everything”, he previously showcased his work at HOFA Gallery in West Hollywood, Los Angeles. Klibansky is known for contradiction, he challenges the way we see an object versus how it is in it´s true form.

Reminiscent of Plato`s cave allegory. The show was nicely structured and even had onlookers and an amazing visual experience. I especially enjoyed the mundane flower pot on the astronaut (“Self Portrait Of A Dreamer”), because I actually felt like I was floating in zero gravity. 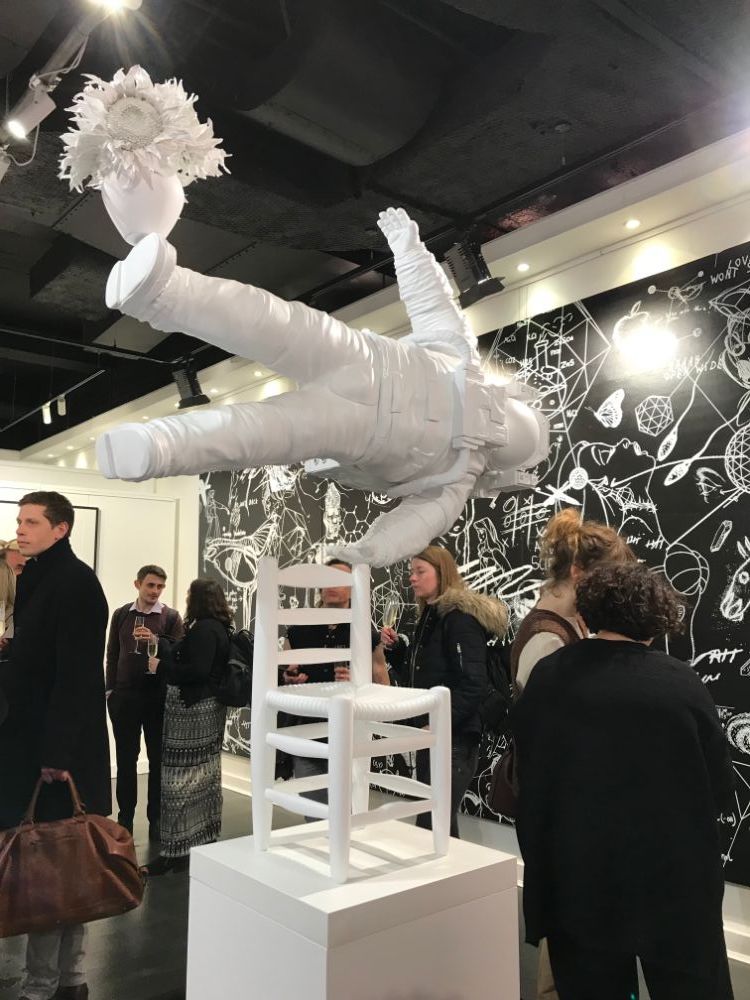 Klibansky uses iconographic and popular culture and his work references melancholy through the lense of seemingly innocent Disney figures, who are known for spreading joy and whimsy. Some of Klibansky’s pieces will instantly resonate with those attending the exhibition, as he uses a visual vocabulary sourced from photographs and online material.

Klibansky intercuts images, including iconic cartoons and creates digital compositions that serve as the foundation for the artist’s series. Each photograph is enriched with acrylic paint, on archival cotton paper and overlays it all with a liquid resin. Klibansky’s works serve as mirrors reflecting what is seen versus what an image implies. In order to tell the truth, Klibansky takes advantage of a lie. One must be conscious of the fact that nothing should be taken at face value in his works; something that makes this exhibition such an intriguing one to witness first hand.

HOFA also exhibited select pieces from Klibansky’s series of bronze sculptures. These playful figures aim to represent the juxtaposition between symbol and association. The best representation of that were the mighty gorillas in frivolous party hats. Other works featured the juxtaposition between science and religion. On one hand, we search for facts and evidence, which could answer the big questions in life and on the other hand a society craves ideals and the believe of a higher power to rally behind.

It seemed to me as if the astronaut in “Leap of Faith” was the representation of science and brought up the question if the astronaut was burdened by the cross or if he was supporting the cross. My guess is that it is open to interpretation. 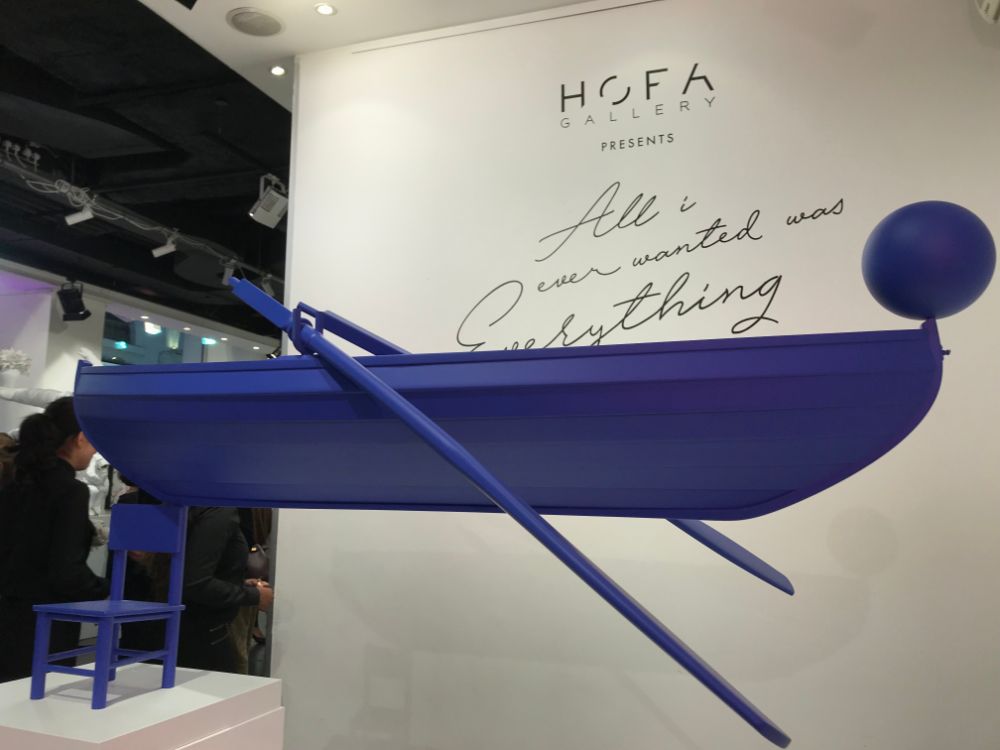 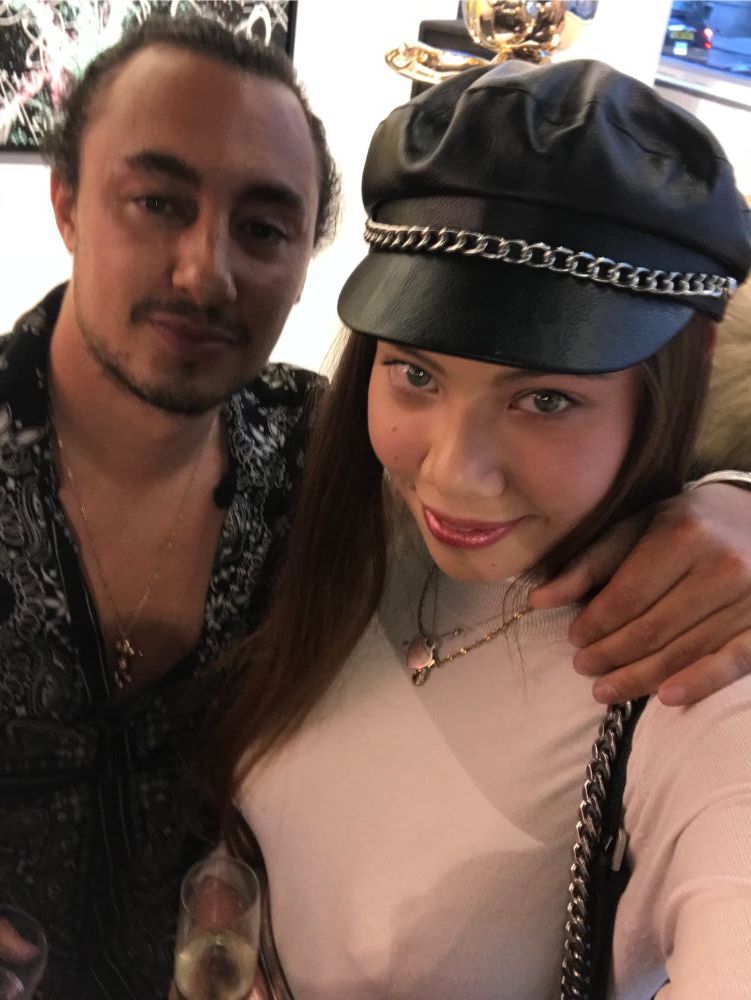 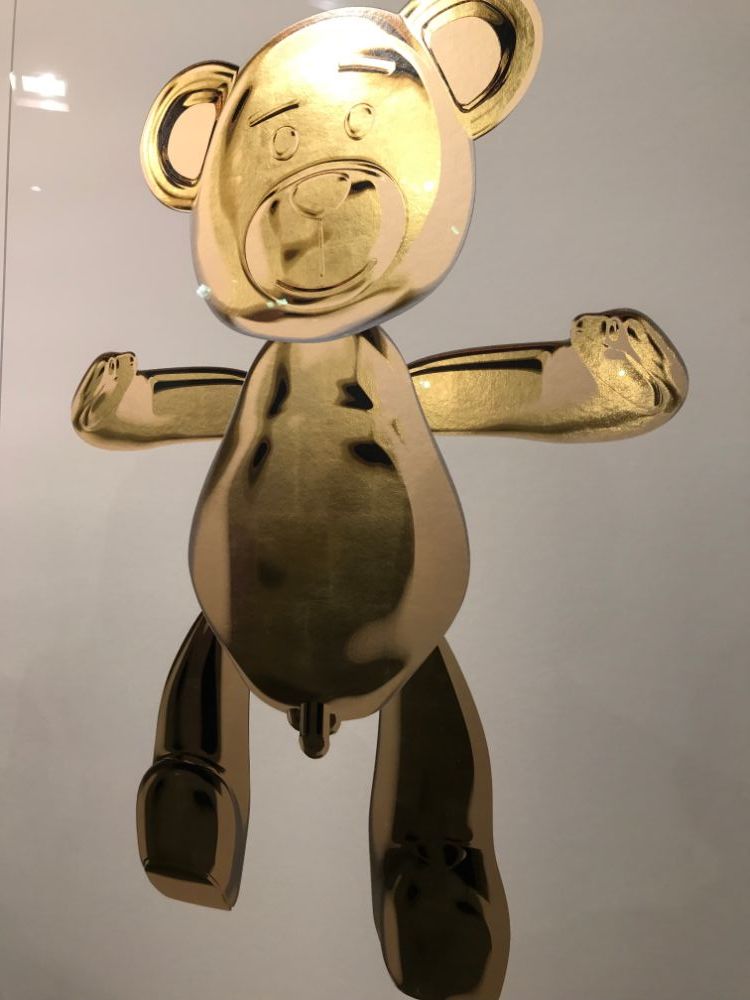 Personally, I am a big fan of Pop Art, especially in terms of how it influenced fashion. His work also reminded me of the boldness of Andy Warhol, who founded the arts & fashion magazine “Interview”, a bridge between art in galleries and art you can wear. Pop Art took simple objects, like a soup can and turned it into the best-known print of the 20th century.

Today you can find brands like Moschino or H&M, which experiment with delighting prints from popular culture. Moschino uses Anime, iconic cartoons and Disney characters on their shirts and dresses, similar to how Klibansky used them in his composition. If Klibansky was ever to partner with them and bring out his own collection, I would be the first one to pre-order those pieces and pull them for a shoot. I can see his art working as dresses, shirts, pants, tshirts or on boots.

There is so much beauty in his melancholic creations, I especially envision “Love Potions Won’t Save This One” as a jersey dress or “Take me to Paradise” (yellow) as beautiful silk shirt. “Villains In My Head” could be an edgy print on white T-shirt. If I had been in a creative rut then going to his show would have pulled me out and sparked my creativity. 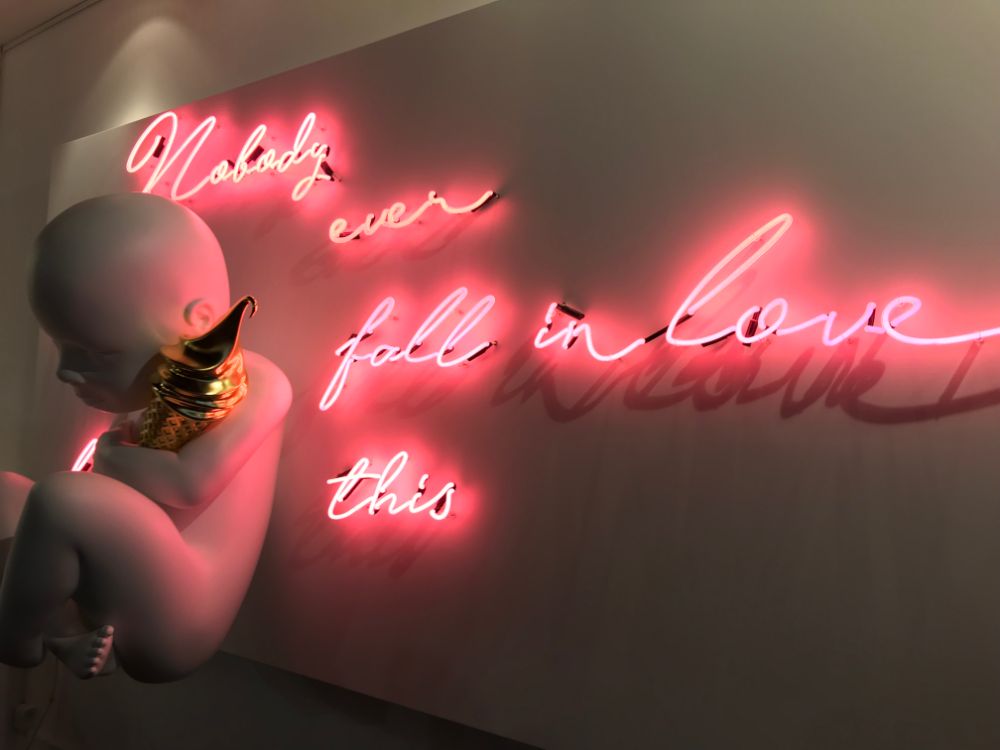 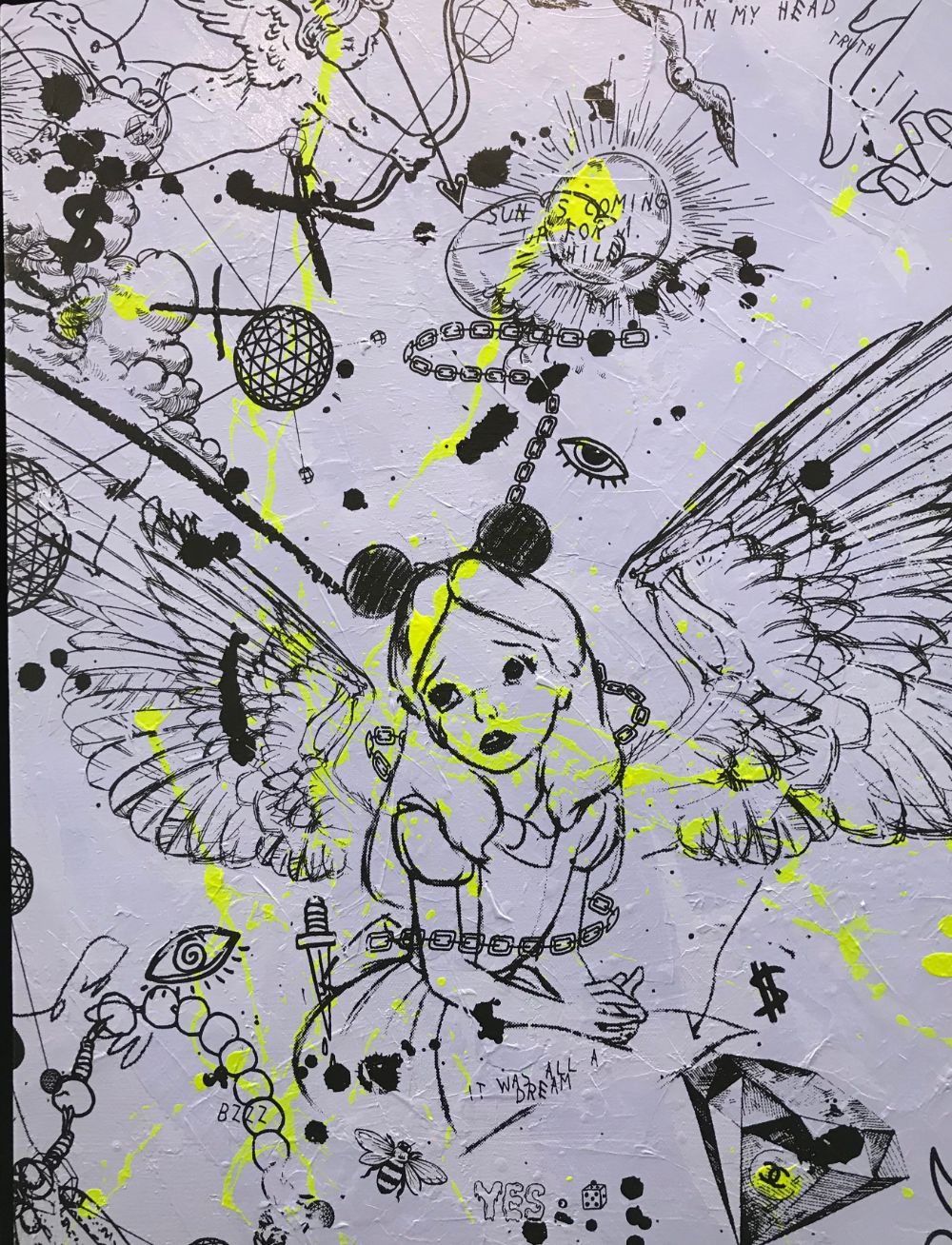 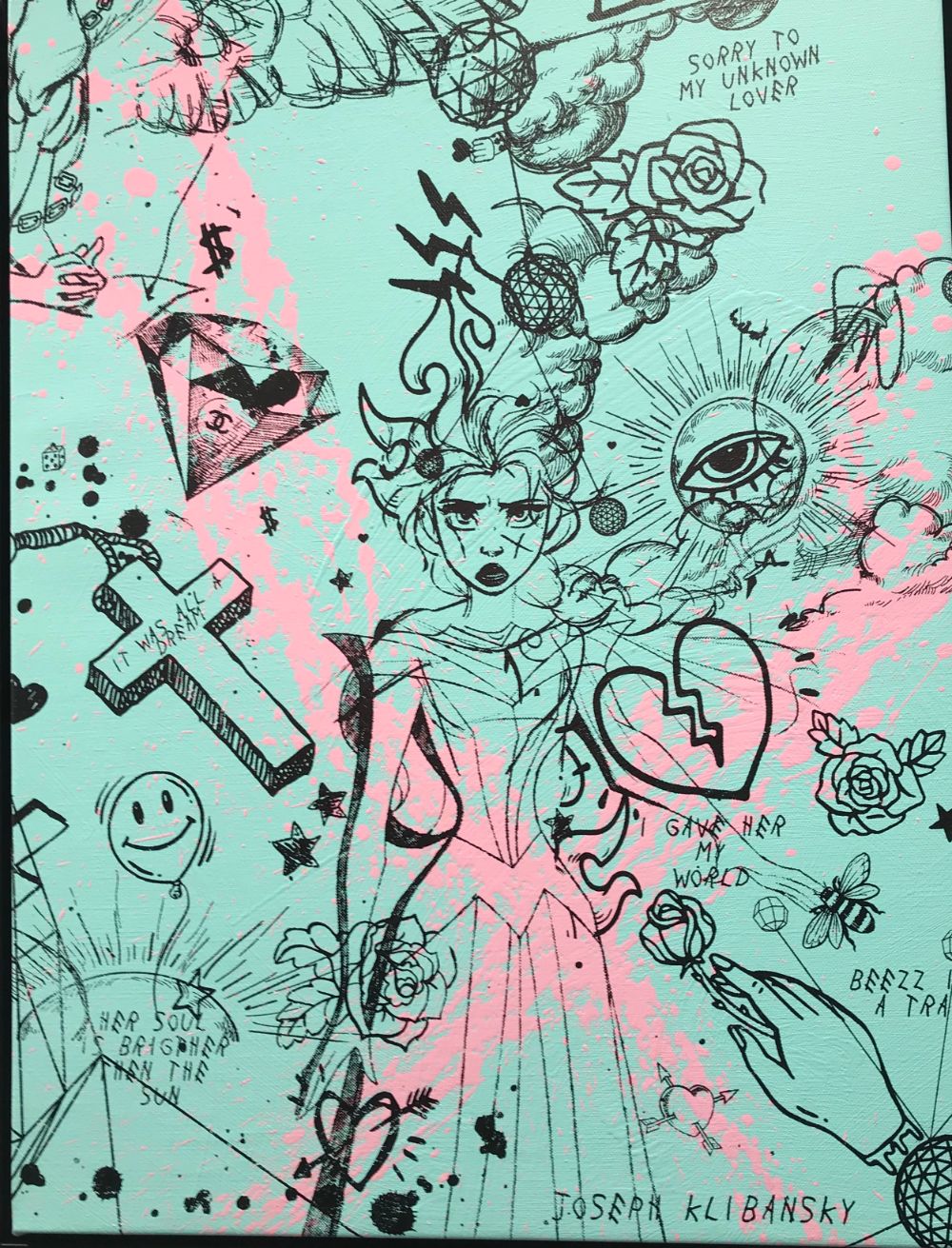 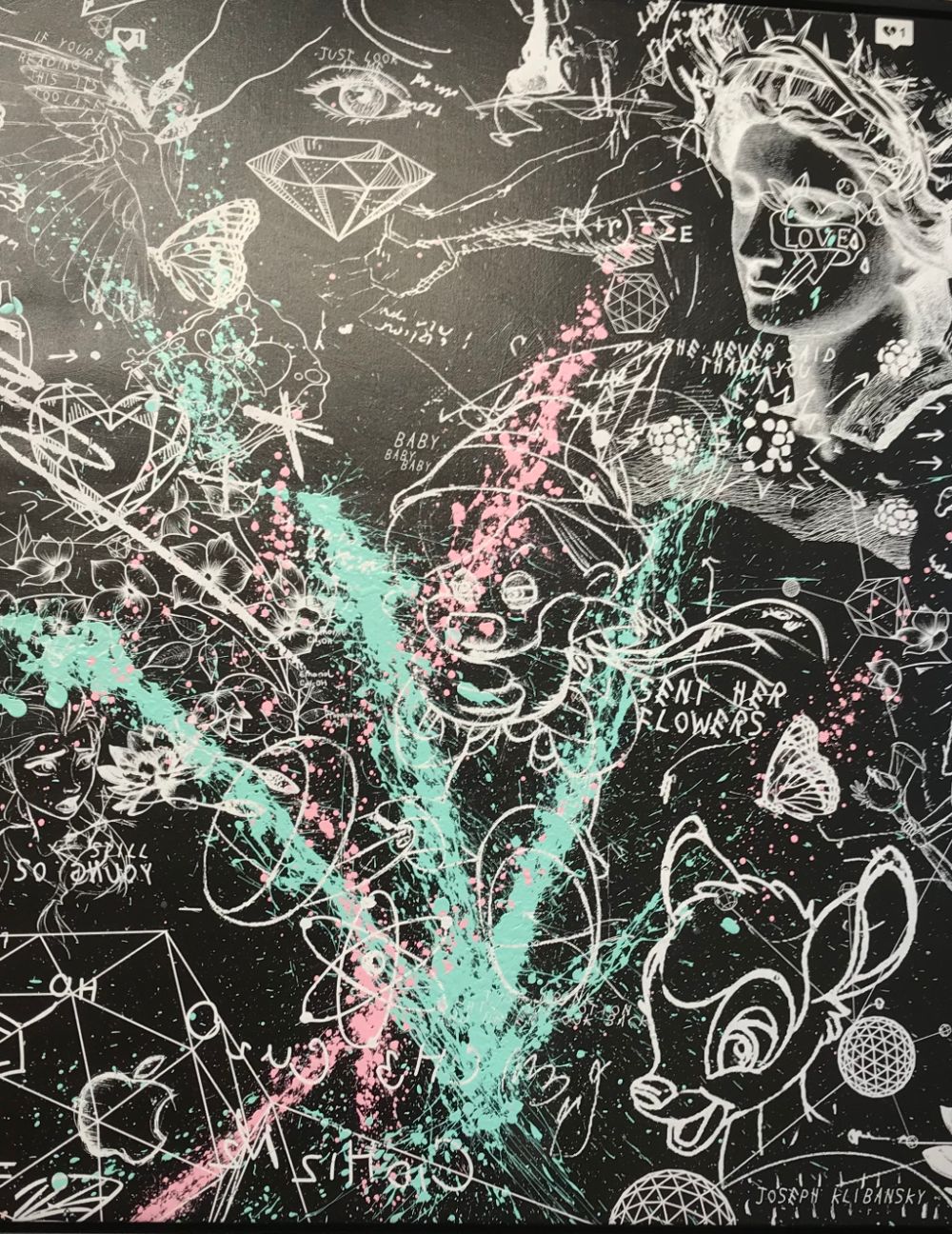 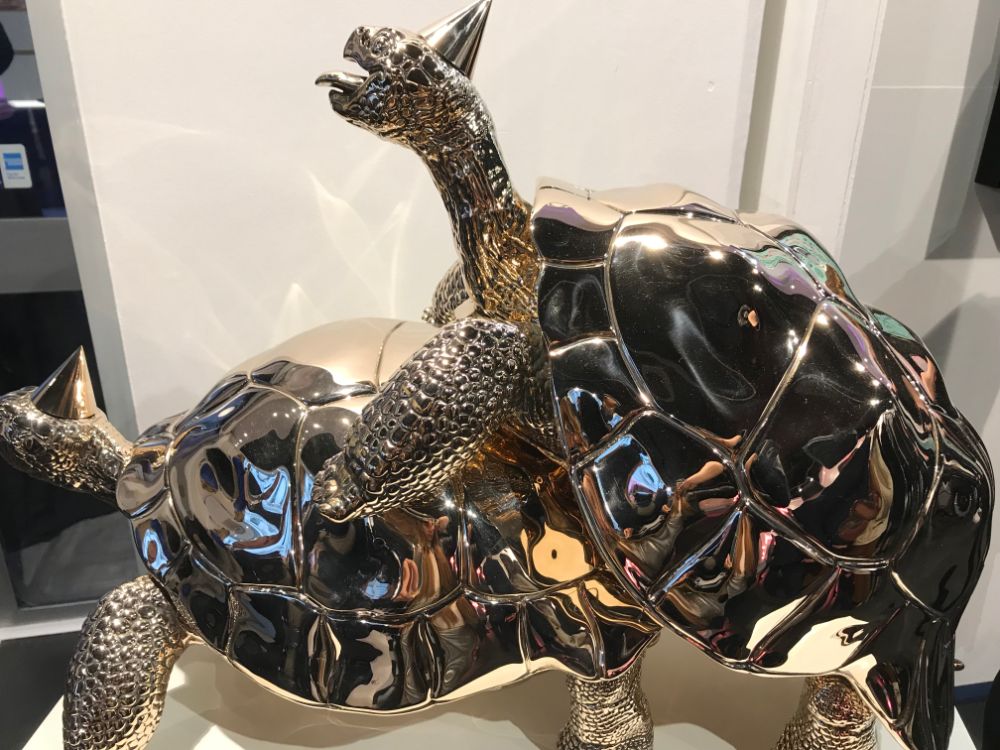 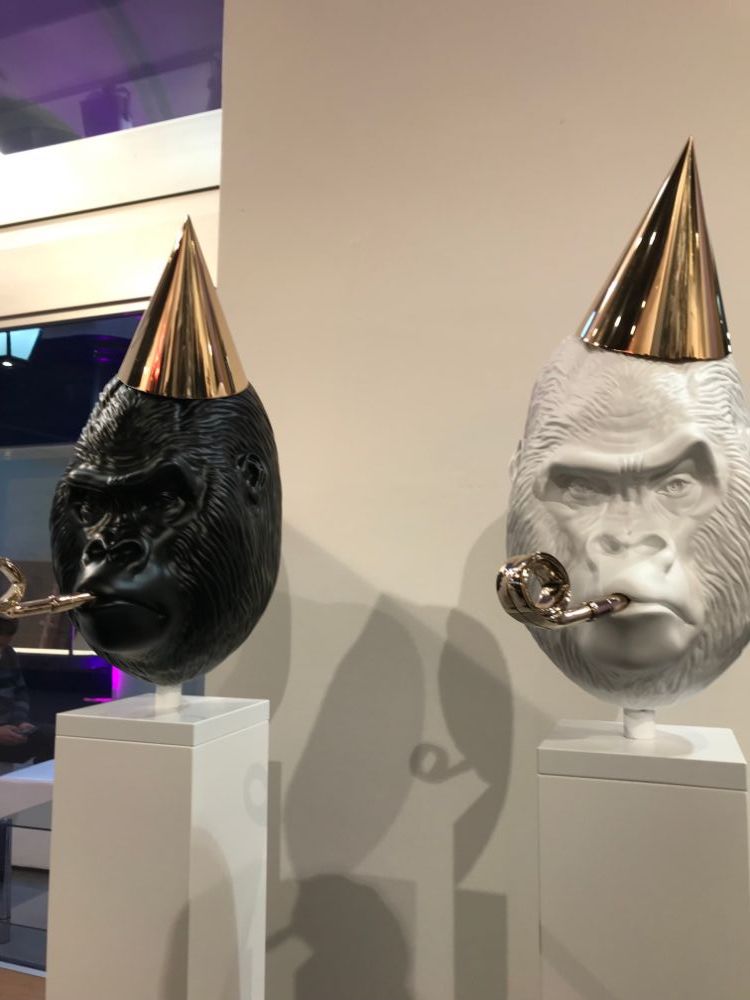 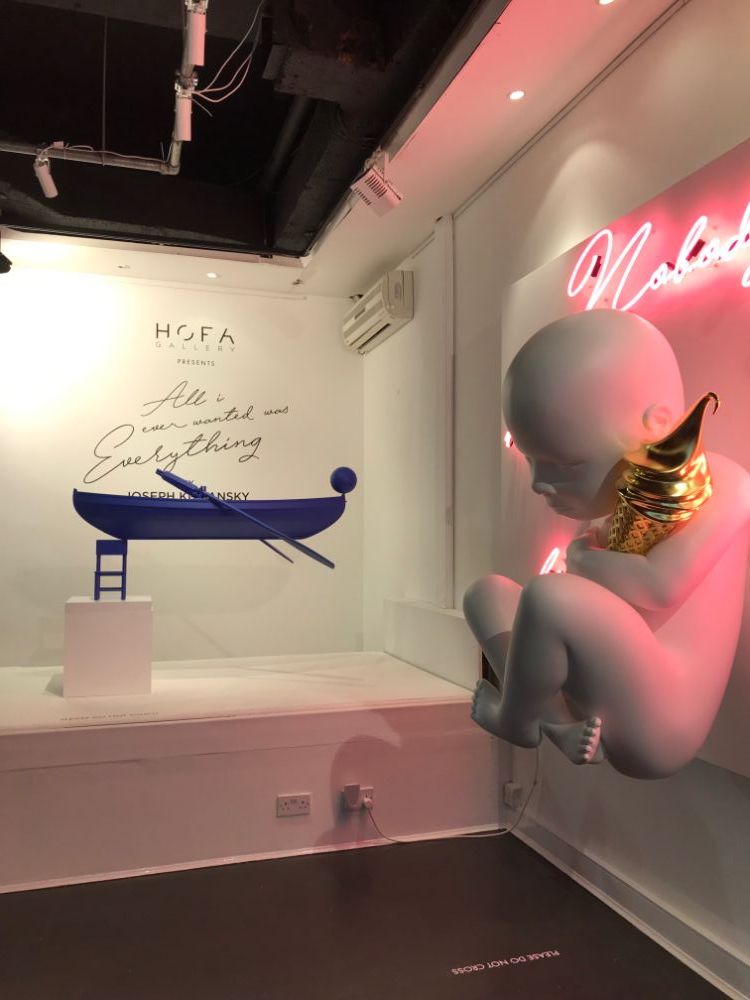 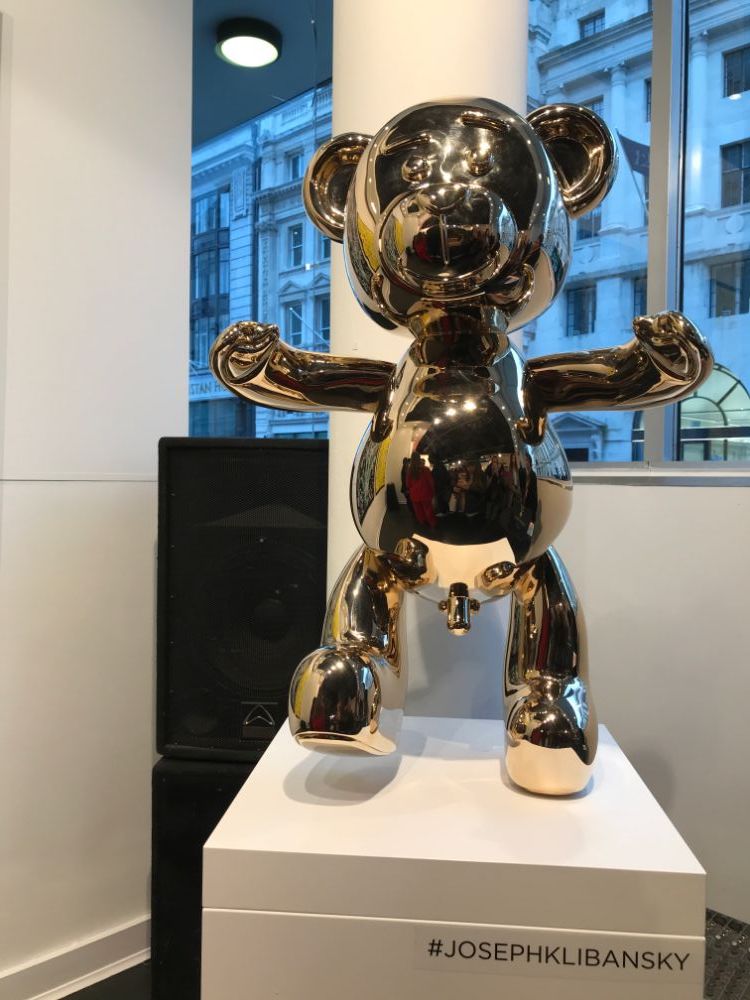